Tips for first-time visitors to Europe (especially with kids).

As I've shared on Instagram, we've just returned from an amazing (and long-awaited) 10-day road trip through Europe.  We left the Netherlands and visited Luxumbourg city, Switzerland and France. 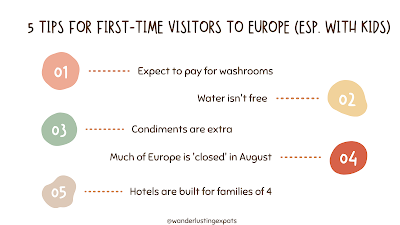 A few of you have sent me questions about the logistics of a road trip with kids in Europe, and have asked me to share a few tips for first-time visitors. So here goes:

1. Expect to pay for bathrooms

2. Most restaurants charge for water.

3. You'll probably have to pay for condiments

4. A good chunk of Europe is "closed" in August

5. Most hotel rooms are strictly built for families of 4

Expect to pay for bathrooms

This annoyed me greatly when we first arrived here in November of 2019. Even public spaces (like train stations and airports) often charge anywhere from €.50-€1.00 per use. The only exception tends to be restaurants (but not always) and venues where you pay for admission, like an amusement park.  Many accept payment by card, but I'd suggest keeping change handy just in case. But there is one huge upside to paying for bathrooms...they are clean and well-stocked!

If you ask for water in a European restaurant, most will ask if you want sparkling or still (ie. tap water), and then bring you a bottle of your choice. Unlike Canada, most places don't provide complimentary water at a restaurant. On our most recent road trip, France was the only exception where we were only charged 50% of the time. Not a big deal, but may come as a surprise if you see 'water' listed on the bill.

If you're eating on the road, chances are you'll end up at a fast-food restaurant as you're unlikely to find anything else unless you venture off the main highways. Condiments are usually only provided upon request, and for a fee. Also, expect to be offered mayo with your fries more often than ketchup.

While the weather may be great at this time of year in most of Europe, many businesses close for several weeks in August. You'll probably be ok if you're only planning to visit the main tourist attractions in an area, but you may find it hard to visit anything off the beaten path. Our last stop took us to Senlis, France and I would estimate that 75% of the restaurants were closed for the entire month of August! What's the best time to visit? I'd suggest early July, as most European schools go until mid-July, so you'll have a better chance of beating the local crowds, especially if you're headed to a sunny destination like Spain or the South of France.

Hotels in Europe are built for families of 4

Don't even bother asking for a cot. We've yet to come across a hotel that offers a cot, and most have large disclaimers that standard rooms can only accommodate 4 people. Some do have family suites, but we're usually better off booking a VRBO or Airbnb. Some hotels do offer a 2nd room discount, which can make it more appealing if you're just doing an overnight and want the ease of a hotel room.

And if driving isn't your thing, Europe's amazing network for trains makes it very easy to visit several countries over a period of 1-2 weeks.

Two months ago we were at the airport getting ready to start our expat adventure. I knew there would be a lot of change and I knew it wouldn't always be easy.  But the transition was harder than I expected. Before we'd left Canada, I was most concerned with getting the kids settled and worried SO much about how they would cope with all the changes. Once we arrived, I quickly realized that the kids would be fine; they're resilient and really only had to focus on their new school. Brent had also been in Rotterdam for a month before we arrived which made his "landing" a little smoother.  I on the other hand had to juggle the rest of life that goes on; groceries, getting registered with the municipality (a multi-step process), signing up for health care, new cell phone etc. Even though most people in The Hague speak some English, anything written is likely still in Dutch, so I rely on Google Translate a lot! To be honest we've felt quite "settled&qu
Read more