January 10, 2020
Two months ago we were at the airport getting ready to start our expat adventure.

I knew there would be a lot of change and I knew it wouldn't always be easy.  But the transition was harder than I expected. Before we'd left Canada, I was most concerned with getting the kids settled and worried SO much about how they would cope with all the changes. Once we arrived, I quickly realized that the kids would be fine; they're resilient and really only had to focus on their new school. Brent had also been in Rotterdam for a month before we arrived which made his "landing" a little smoother.  I on the other hand had to juggle the rest of life that goes on; groceries, getting registered with the municipality (a multi-step process), signing up for health care, new cell phone etc. Even though most people in The Hague speak some English, anything written is likely still in Dutch, so I rely on Google Translate a lot!

To be honest we've felt quite "settled" since mid-December.  Mom's visit was a nice anchor to home, and the familiar rhythm of Christmas and New Year's made it easy to feel like we were over the hump of our big move. However,  Maren's first circus class last night was a reminder that we still probably have a few crash landings in our future.

Excited to join a new circus school (she was doing circus in Dartmouth) we eagerly biked to the class that she'd been looking forward to all week.  But, the moment we walked in and she realized that everything was different - new equipment, new teacher, new kids and that most of the instruction is in Dutch, she crashed. She hid behind my arm and cried as she kept saying "I didn't expect it to be SO different". And I knew exactly how she felt. I'd felt that same way when I bought groceries in those first few weeks, or tried to sign up for a cell phone plan (it took several tries), or even understand what I was buying!

After some time, she accepted her lovely instructor's invitation to join in and away she went.  :) 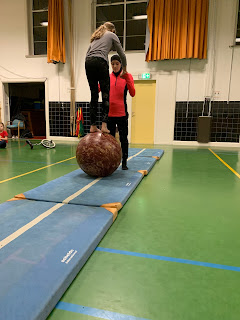 Cheers to a new year and fewer crash landings in the months to come.