Tips for making an international move with cats

February 14, 2020
This post is long overdue as the cats have been here for 3 months now, but I thought I'd share this while it's still relatively fresh in my mind.

The steps required before your move depend entirely on where you're going and where you're coming from. As we were moving from Canada to Europe, it was relatively straightforward but still required at least 30 days notice to get the required vaccinations and paperwork complete.  In our case, the cats needed:

-A new airline approved carrier
-An updated rabies vaccine at least 30 days before travel, but less than 1 year old.
-Microchip insertion (if not already done)
-A physical examination with completed paperwork from our vet including vaccination and microchip certificates.
-Endorsement of the paperwork by a CFIA vet (see below for how that got tricky).
-Most of Europe requires pets to be received by a customs agent so we worked with Animals To Fly who were also great and easy to work with. 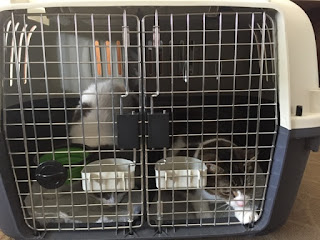 In hindsight this was more straightforward that it I thought it would be, but I'm still very glad we worked with Patti Bond from PetsGo. It probably only seems straightforward now because Patti made it seem easy! There are a lot of firm rules and deadlines that need to be met, so I would 100% recommend working with a pet relocation specialist if you can. It also helped that the cats were able to board with her for a few days before travel.

We arrived in the Netherlands on November 11th and made plans for the cats to follow shortly after. As we were working with PetsGo, Patti made the reservations with KLM for them to fly on the 13th and arrive on the 14th. In order for them to fly on the "non-commercial" certificate they had to arrive within 5 days of our arrival. This wouldn't have been a problem if Halifax hadn't been blessed with an ice storm on the evening of the 12th. :( The 13th was a very stressful day as we waited to hear what would happen, and ultimately we got word that their flight had been cancelled and would have to be rebooked. This is where I offer up my #1 tip for moving with pets...

Because they were booked to fly on a Wednesday, and both KLM and the receiving pet agent in Amsterdam can only accept pets M-F, they weren't able to get another flight for a full week. In the future, we will always book their flight on a Monday to give us some wiggle room should they be delayed.

This also meant that both their health certificate from the vet, and the CFIA endorsement would expire as it was only valid for up to 5 days after our arrival.  And this is where Patti became invaluable! Not only did she board them, she arranged for new vet certificates and drove an hour away to get their new commercial CFIA endorsement completed. I have no idea how I would have arranged all of that from overseas.

But after all of that, they arrived safe and sound on the 21st. :) We were so happy to see them and there were equally happy to see us. And within a few days they were all settled in. :) 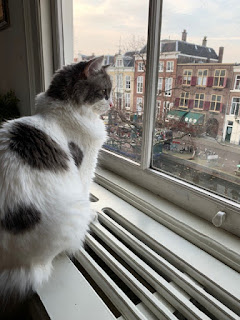 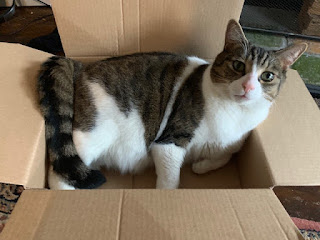 Two months ago we were at the airport getting ready to start our expat adventure. I knew there would be a lot of change and I knew it wouldn't always be easy.  But the transition was harder than I expected. Before we'd left Canada, I was most concerned with getting the kids settled and worried SO much about how they would cope with all the changes. Once we arrived, I quickly realized that the kids would be fine; they're resilient and really only had to focus on their new school. Brent had also been in Rotterdam for a month before we arrived which made his "landing" a little smoother.  I on the other hand had to juggle the rest of life that goes on; groceries, getting registered with the municipality (a multi-step process), signing up for health care, new cell phone etc. Even though most people in The Hague speak some English, anything written is likely still in Dutch, so I rely on Google Translate a lot! To be honest we've felt quite "settled&qu
Read more